Late yesterday, Federal Judge Susan Oki Mollway, of the District of Hawaii, ruled that the County of Maui needs a Federal Clean Water Act NPDES permit for its groundwater discharge of treated water from its waste water treatment facility.

This isn't the first time the Judge has ruled against the County.  The last time the Court's decision was revised by the Ninth Circuit Court of Appeals before it was ultimately remanded by the United States Supreme Court for application of its new seven factor functional equivalence test of whether a discharge to groundwater is within the reach of the Federal Clean Water Act.

The Court's fifty page decision on cross motions for summary judgment finds in the County's favor with respect to some of those seven factors but concludes that the County's discharge of treated water is within the reach of the Clean Water Act.

Not mentioned at all in the Court's decision is an eighth factor enumerated by the United States Environmental Protection Agency after the Supreme Court's Maui decision -- the design and performance of the system or facility from which a pollutant is released.

That didn't matter at all to Judge Mollway who found such changes both during and after the discharge of treated water from the County's facility but also found that the treated water was not "devoid of pollutants" and held that the discharge of any pollutants to groundwater is covered by the Clean Water Act when the discharge is ".3 to 1.5 miles" from a Water of the United States and the water containing "pollutants" will take "14 to 16 months on average" to reach the Water of the United States.

I suspect the Ninth Circuit would agree and so this may be the end of the road for the County of Maui. Now EPA and millions of property owners whose discharges to groundwater are not "devoid of pollutants" will need to consider what this first application of the Maui functional equivalence test means for them. 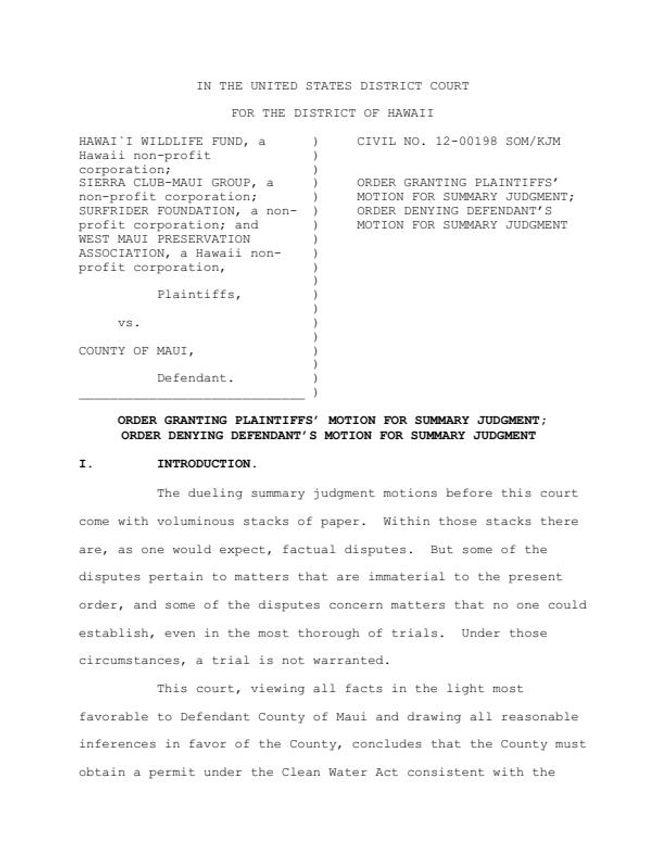