Recently, the States of Idaho  and Utah --both controlled by the Republican Party--sent letters to S&P, one of the three major credit rating agencies, objecting to its inclusion of ESG criteria in its assessment of the creditworthiness of their respective states (or any political subdivision).

Specifically, Idaho stated that "S&P has adopted a politicized ratings system," and Utah likewise characterized S&P's "newfound focus on ESG as politicizing the ratings process."  In particular, Idaho noted "[t]he absence of any transparent and objective criteria" and criticized the "opaque evaluation system," concluding that "these [ESG] ratings are a means to politically evaluate the decisions of states and their subdivisions."  In essence, both Idaho and Utah have criticized the inclusion of ESG criteria in a credit rating as diverging from the traditional focus on material financial issues in credit ratings (e.g., whether an entity has the ability to make interest payments on a bond), and as a backdoor means to impose a political value judgment on the policy choices made by a particular state.  As Utah noted in its letter, ESG issues "are not technocratic questions; they are normative questions [and] [n]o financial firm should substitute its political judgments for objective financial analysis."

This sort of criticism of ESG--that it represents a departure from the sober financial analysis that was typically the sole focus of corporate America--has been frequently voiced as ESG criteria become more widely adopted and as different entities experience pressure--whether from the government, investors, or the public--to incorporate ESG criteria into decision-making.  Indeed, this line of thought has characterized most of the public statements of the Republican SEC Commissioners ever since the Biden Administration announced that it would promulgate mandatory climate disclosures as part of its regulatory agenda.

One should expect that this chorus of criticism will only increase, and, as indicated by these letters, it is likely that this particular objection--essentially, that imposing these criteria are ultra vires, beyond the scope of an entity's authority--will be embraced by significant state political actors who will not hesitate to wield this legal argument when combatting federal government regulations.

On behalf of the State of Idaho, we object to S&P Global Ratings’ (“S&P”) publishing ESG credit indicators as part of its credit ratings for states and state subdivisions. To this end, we join with our sister states, especially Utah’s thorough letter in objection, in opposing S&P’s use of ESG credit indicators and object to any attempts at subjective quantification beyond the conservative and careful management of a state’s finances, repayment of debt, and a State’s ongoing creditworthiness. 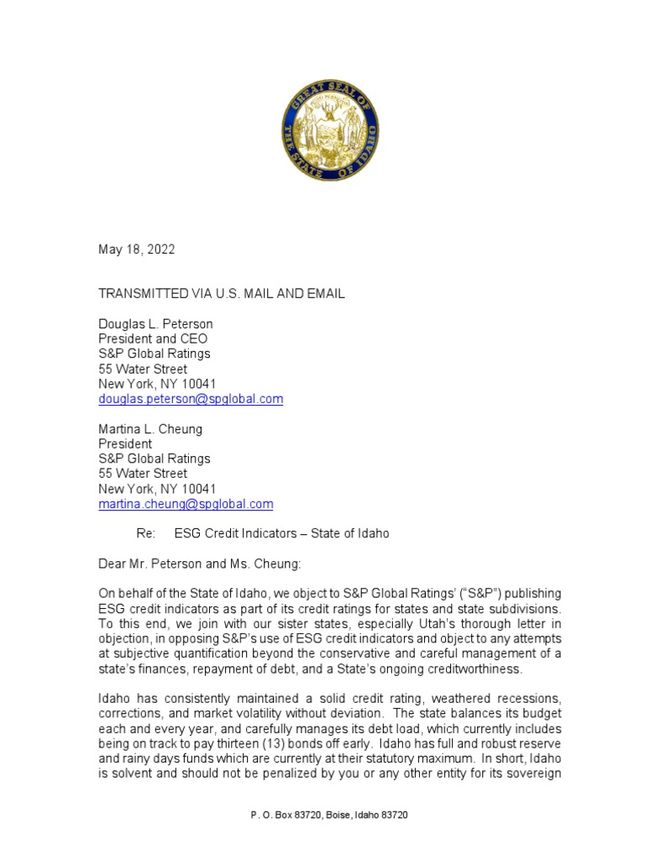 Harassing EPA in the Courts isn't in our interests even when an NGO like CLF or the CRWA is the Plaintiff
Jeffrey R. Porter
repost  cancel